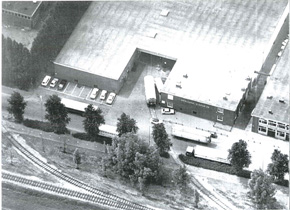 Eurofrigo BV is a leading company in logistics services in Europe for temperature-controlled food products. We specialise in the storage, forwarding, customs clearance and development of innovative supply chain solutions.

Eurofrigo BV is an independent business unit of the Nichirei Corporation. The total storage capacity of the two facilities in Rotterdam is more than 67,000 pallet places. Both refrigerated and freezer facilities are located in the port area of Rotterdam, close to the container terminals and the (A15) highway, in the direction of Europe's hinterland.

Eurofrigo Limburg (Venlo en Roermond) is located in the most important three-country point of Europe (close to the Ruhr district). Eurofrigo Limburg offers 3 freezing facilities, with a total of 69,800 pallet places for food products.

Our business began back in 1978. That year, we opened our first refrigerated and freezing warehouse on the Waalhaven in Rotterdam. In 1982, we grew by acquiring Koelveem Diepvries in Rotterdam. A year later, in 1983, the first refrigeration and freezer facility was opened in Roermond, and our sister company, Thermotraffic GmbH was started. Since 1988, we have officially been a part of Nichirei Corporation Tokyo, and in that same year, Thermotraffic was established. In 1989, our business grew even more, with the creation of Eurofrigo Venlo BV. After that, we opened our first European checkpoint, in 1993. Since 1994 we have refrigeration and freezing facilities in Rotterdam—Eemhaven, and we also have facilities in Rotterdam—Maasvlakte since 1998. Since 2003, we also have an EU checkpoint for Pet Food, at our Maasvlakte location. In 2005, this checkpoint was expanded with a Plant Hygiene checkpoint.

Certified according to the highest quality standards

Your web browser is outdated.

For correct viewing of this website is a recent version of your browser required. You can update your browser by downloading the latest version.